Wildlife Viewing on the Olympic Peninsula

The Olympic Peninsula is a mecca for wildlife viewing. The three distinct ecosystems—alpine, rain forest and coastal beach—of Olympic National Park are home to an amazing array of wildlife. Bring your binoculars and watch for: Around 300 species of birds reside on the Olympic Peninsula and its surrounding waters. Bald eagles, raptors, hummingbirds, quail and numerous waterfowl, such as cormorants and common murres, can be easily viewed. The Dungeness National Wildlife Refuge, just north of Sequim, and the Mary E. Theler Wetlands Nature Preserve near Belfair are great birding locations. The Dungeness River Audubon Center in Sequim offers a free morning bird walk every Wednesday. It also features an excellent collection of taxidermy birds and other wildlife. The annual Olympic BirdFest in April offers tours around the north Olympic Peninsula. Check out the Birding Drive the Loop Map. Whales have been a historically integral part of the region’s native tribal cultures. The Welcoming the Whales ceremony hosted by the Quileute Nation every spring celebrates this heritage. Indeed, spring is the most popular time for whale watching—then transient pods migrate north to cooler waters, and young calves can be seen following their mothers. Migrating humpbacks, gray whales and orcas can be spotted traveling just off Pacific Ocean beaches such as Kalaloch and Cape Flattery, the Strait of Juan de Fuca and the Salish Sea’s coastal waterways. Resident orcas and gray whales are also commonly spotted, along with porpoises, seals, sea lions and otters and the occasional minke whale. The Whale Trail (TheWhaleTrail.org) is a great resource to find the best viewing locations from land. Also check out the Whale Watching Drive the Loop Map. Or hop aboard a local whale-watching tour boat. Port Angeles Whale Watch Company in Port Angeles and Puget Sound Express in Port Townsend both offer excellent tours to spot both whales and other marine life. Black-tailed deer are a common sight both in the towns and within the national park. Spotting Roosevelt elk takes a bit more luck. Named after President Teddy Roosevelt, these impressive creatures roam the rural farmlands and temperate rain forests in sizeable herds. They also range near small communities along Highway 101 and Highway 112—Forks and Sequim in particular. Watch for elk and deer when driving. Elk Crossing signs will blink if a herd is nearby. An Olympic Marmot family at Hurricane Ridge greeting each other

The Olympic marmot is found only in the foothills and higher mountain elevations of the Olympic Peninsula. Cousin of the groundhog, the marmot is nicknamed “whistle pig” for its piercing whistle. Listen and look for marmots in late spring to early fall at high elevations like Hurricane Ridge. Other small mammals you may spot include beavers, elusive fishers and the endemic Olympic short-tailed weasel. While the cute Olympic marmot is safe to approach for a closer look, larger mammals such as black bear, cougar, bobcats and coyotes are not. They inhabit all the regions of the Olympic Peninsula and the national park. Large cat and coyote sightings are very rare. Black bears are spotted more frequently, especially if food is present. All backcountry campers are required to carry bear-proof food canisters for this reason. The most likely season to encounter bears is early fall when ripe berries and spawning salmon attract them. A spawning sockeye salmon in a Quinault River tributary

Like whales, salmon have always held an important place in the culture of the native tribes. Early into late fall is the best time to view coho salmon during their annual spawning. Much effort has gone into strengthening the wild salmon populations, including the largest dam removal project in history on the Elwha River. Salmon are now returning to the Elwha and are expected to grow to a population of more than 300,000. Salmon Cascades on the Sol Duc River offers one of the best vantage points. Chinook and Pacific salmon can be seen in the Hoh, Queets and Quillayute rivers on the western side of the peninsula. Sockeye salmon, with their bright red bodies, can best be viewed in November and December in the Quinault River and its tributaries. On the eastside, the Duckabush River, which connects Olympic National Forest to Hood Canal, is ideal for not only salmon viewing but birding and other wildlife watching.

Visit the Olympic National Park Visitor Center in Port Angeles for more information on the Olympic Peninsula’s wonderful wildlife. Here and at other visitor centers and ranger stations around the peninsula, you can learn about what to look for and where to look. Expert tour guides, as well as park rangers, offer guided hikes and programs. 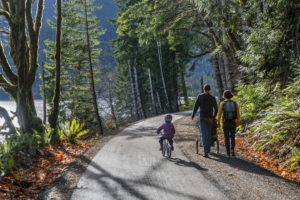